Home » Beauty FAQs » Everything You Need To Know About Skin Purging

Everything You Need To Know About Skin Purging

If you’re interested in improving your skin, you may have heard of “skin purging.” But what is it, exactly? Keep reading to find out everything you need to know about skin purging!

What are the causes of skin purging

Skin purging is the process by which the body gets rid of dead skin cells, sebum, and other impurities from the pores. The most common cause of skin purging is acne. When a pore becomes clogged with sebum, bacteria grows and causes inflammation. This results in a pimple. Other causes of skin purging include exposure to certain chemicals, such as those found in cosmetics, and harsh weather conditions.

What are the different types of skin purging 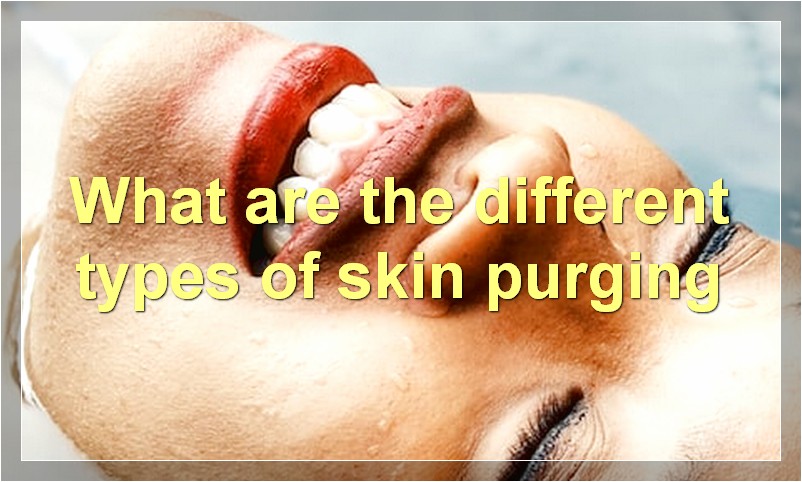 There are a few different types of skin purging: physical, chemical, and natural.

Physical purging involves using a physical exfoliant to manually remove dead skin cells from the surface of the skin. This can be done with a Clarisonic brush, a washcloth, or even just your fingers.

Chemical purging uses acids or other ingredients to break down the bonds between dead skin cells, causing them to slough off. This can be done with glycolic acid, lactic acid, retinoids, or BHAs.

Natural purging is when your skin sheds dead skin cells on its own. This usually happens in response to something like an increase in hormones ( during puberty) or a change in seasons (like in the spring).

How can you tell if you are experiencing skin purging

If you are wondering whether or not you are experiencing skin purging, there are a few things you can look for. First, purging typically occurs after starting a new skincare routine or using a new product. If you have recently made a change to your skincare routine and have started to experience breakouts, it is possible that you are experiencing skin purging.

Another way to tell if you are experiencing skin purging is by looking at the type of breakouts you are experiencing. If you are noticing that your breakouts are deeper and more cystic than usual, this is a sign that your skin is purging. Cystic acne is typically caused by trapped dirt and oil deep within the pores, so it is likely that your new skincare routine is helping to bring these impurities to the surface.

If you are unsure whether or not you are experiencing skin purging, it is always best to consult with a dermatologist. They will be able to assess your skin and help you determine the best course of action.

Is skin purging a temporary or permanent condition

Skin purging is a temporary condition that can last anywhere from a few days to a few weeks. It is characterized by the sudden onset of acne, which can be mild to severe. While skin purging is often thought of as a side effect of certain medications, it can also occur in people who are not taking any medication. There are a number of possible causes of skin purging, including hormonal changes, changes in diet, and stress.

What are the treatments for skin purging

There are many treatments for skin purging, but the most effective one is to use a retinoid. Retinoids are derivatives of vitamin A, and they help to unclog pores, promote cell turnover, and reduce inflammation. The most commonly used retinoids are tretinoin and adapalene, which are available in both prescription and over-the-counter formulations.

Other treatments for skin purging include topical antibiotics, oral antibiotics, birth control pills, and spironolactone. These treatments can help to reduce the number of pimples and prevent new ones from forming.

If you’re dealing with skin purging, it’s important to be patient and consistent with your treatment regimen. It can take several weeks or even months to see results. In the meantime, be sure to gentle with your skin and avoid any harsh cleansing or exfoliating products that could irritate your skin further.

Can skin purging be prevented 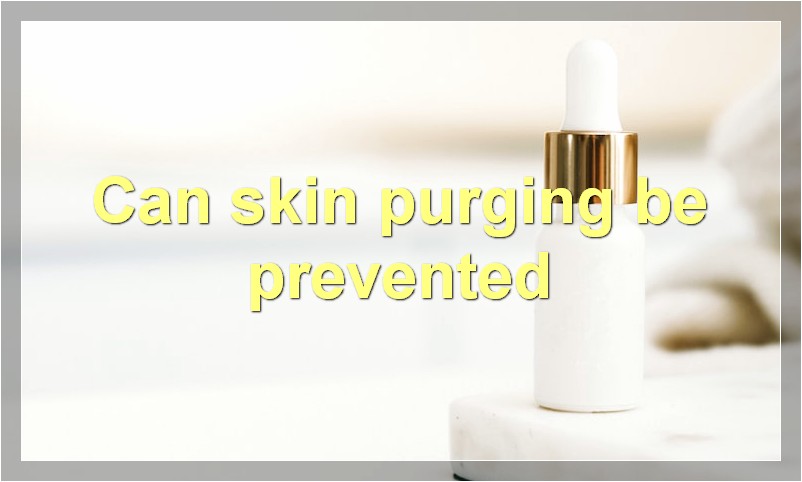 Sure, you could try to prevent skin purging by not using any products on your skin. But where’s the fun in that? If you want to keep your skin looking its best, you’re going to need to use some products. And when you use new products, you may experience some skin purging.

So what is skin purging, exactly? It’s when your skin tries to get rid of all the gunk that’s built up over time by pushing it to the surface. This can happen when you start using a new product or switch up your skincare routine.

Skin purging usually lasts for a few weeks, but it can vary from person to person. You might see more breakouts than usual, or your skin might just feel a bit more sensitive.

The good news is that skin purging is temporary and it does eventually go away. In the meantime, there are a few things you can do to help ease the symptoms:

1. Cleanse twice a day with a gentle cleanser.

3. Use a light moisturizer to keep your skin hydrated.

4. Avoid touching your face too much.

6. Wear sunscreen every day to protect your skin from the sun’s harmful rays.

7. Be patient! Skin purging doesn’t last forever and your skin will eventually adjust to the new product or routine.

When you start using new skincare products, you may experience what is called “skin purging.” This is when your skin starts to break out as it gets rid of all the dirt and impurities that have been clogging up your pores. Skin purging can start as early as a few days after you start using new products, but it can also take up to a few weeks.

If you are someone who has never experienced skin purging before, it can be a bit of a shock when it happens. You may be wondering why your skin is suddenly breaking out when you’ve been using the same products for years without any problems. The good news is that skin purging is actually a sign that your new skincare routine is working!

While it may not be the most fun process to go through, purging is important in order to get rid of all the gunk that has been built up in your pores over time. Once your skin has purge all of the impurities, you will notice that your complexion will be much clearer and healthier-looking.

So, how long does skin purging last? Unfortunately, there is no one-size-fits-all answer to this question. Everyone’s skin is different and will react differently to new products. For some people, skin purging may only last for a few days, while others may experience it for a few weeks.

If you are concerned about how long your skin purging will last, the best thing to do is to talk to your dermatologist or another skincare professional. They will be able to give you personalized advice based on your individual skin type and situation.

In the meantime, here are a few tips to help you get through the skin purging process:

1. Be patient – Remember that skin purging is a temporary process and it will eventually come to an end. In the meantime, try to be patient and give your skin time to adjust to the new products.

2. Avoid picking – It can be tempting to pick at your breakouts when you see them starting to form, but resist the urge! Picking at your skin will only make the problem worse and could lead to scarring.

3. Stay hydrated – Drinking plenty of water will help to flush impurities out of your system and keep your skin hydrated. Aim for 8 glasses of water per day.

4. Don’t give up – It can be tempting to throw in the towel and go back to your old skincare routine when you’re in the midst of a skin purge. But don’t give up! If you stick with it, your skin will eventually adjust and you’ll be glad you made the switch.

Purging is a process that the skin undergoes to get rid of dead skin cells, impurities, and other debris. It usually lasts for about two weeks. The skin may feel dry, tight, and irritated during this time. After the skin has been purged, it will be smoother, softer, and have a more even tone.

If your skin is not responding well to a new product, it is important to consult with a dermatologist to ensure that you are not experiencing skin purging. Purging is a process by which the skin gets rid of impurities and dead skin cells, and it can cause redness, irritation, and breakouts. If you think you may be experiencing skin purging, here are some tips on how to deal with it:

2. If you think you are experiencing skin purging, continue to use the product as directed. It is important to give the product time to work.

3. Be sure to cleanse your face twice daily and use a gentle cleanser. Avoid scrubbing or using harsh products on your face, as this can irritate the skin and make the situation worse.

4. Moisturize regularly, as this will help to soothe the skin and keep it hydrated.

5. If the purging is severe, consult with a dermatologist for professional advice.

When it comes to skin care, there are a lot of different terms and procedures that can be confusing for the average person. One term you may have heard before is “skin purging.” But what does it actually mean?

Skin purging is when your skin starts to break out after using a new product. It is your skin’s way of getting rid of all the dirt and impurities that have built up over time. Some people may experience skin purging after using a new cleanser or face mask, while others may notice it after starting a new skin care routine.

If you are experiencing skin purging, don’t worry! It is actually a good sign that your skin is responding well to the new product. Just make sure to keep up with your regular skin care routine and the Purging will eventually stop.

Have you ever experienced skin purging? What was your experience like?

The Benefits And Risks Of Using Acetone Nail Polish Remover

Cute Makeup Looks For Every Season

The Benefits And Risks Of Microneedling For Hair Loss

Does the Sun Help Acne?

Does Smoking Weed Cause Acne?

How To Choose, Use, And Care For A Hair Dye Brush

Everything You Need To Know About Makeup Remover Cloths

How to Lose Neck Fat

Laser Acne Treatment: Everything You Need To Know

What happens when you put Purple Hair Shampoo on Dry Hair?

Gorgeous Nail Shape Guide for Any Woman to Have

How to Get Rid of Crepey Skin

The Benefits And Risks Of Using Acetone Nail Polish Remover